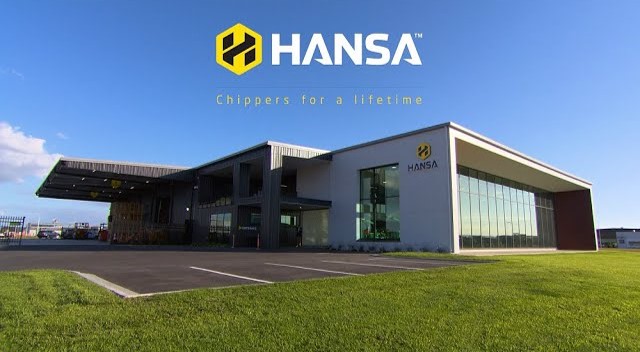 Established in 1981, Hansa Products™ have a long-standing reputation as New Zealand’s specialist manufacturer and designer of high-performance wood chippers. With chippers from 2” through to 10” capacity and more than 15 different models that are all NEW ZEALAND MADE. Hansa is now sold throughout Australia, Germany, UK, Ireland, Switzerland and in the Benelux region (Belgium, Netherlands & Luxemburg).

Home gardeners, landscapers and lifestyle block owners who are serious about their landscape appreciate the versatility and reliability of a genuine Hansa chipper. While the serviceability and quality parts are what makes Hansa a trusted name for hire centres.

Hansa also excels in the manufacturing of professional chippers for orchardists or arborists. The dedicated in-house design team enables continuous sharpening of each design, this has led to several unique innovations, such as the remote-controlled tracked Model C65. This user focused approach to design is core to Hansa’s success, and is what keeps this Kiwi business competitive as a world class supplier.

In recent years Hansa undertook the SIRI assessment as part of the Callaghan Innovation Industry 4.0 Demonstration Network programme which resulted in Hansa being ranked highly in enterprise automatization. As a result of increased manufacturing costs Hansa has recognised industry 4.0 as being pivotal for their future success. Hansa is now working through a 10-year automation piece which will result in increased automation, profit margins, and being able to supply their increasing demand confidently.

Unlike many business’s, COVID-19 resulted in a huge increase in demand for Hansa. Managing Director, Martin Vogel, suggested that this was due to people not travelling and transferring this spend into products for use in their own back yards. Throughout COVID-19 Hansa also experienced rapid growth into Australia, Germany, United Kingdom, and the Benelux region. Hansa are now moving their focus towards the French market. Vogel agreed that not meeting their customers face to face was a challenge. However, it has been absolutely critical that Hansa had their representative – Steve Milburn – on the ground based in Germany. Steve has played a pivotal role, in the European markets, recently building the Benelux presence and achieving the right cultural alignment when onboarding new distributors.

The Future for Hansa Products

Looking forward, Hansa has continued growth plans for Australia, in both the lifestyle and commercial market segments as well as continuing to open new markets in Europe. Vogel also expressed that Hansa recognises the value in digital channels in conjunction with traditional distributor networks, therefore will be growing eCommerce as it is a great channel to market.

Hansa will continue to maintain its strong market share in New Zealand & Australia while driving growth in their European markets. ExportNZ looks forward to watching Hansa’s growth in the future as our member continues to flourish.

New Zealand exporter Trimax manufactures high-quality commercial mowing technology that is poised to take over the grounds care market across the world. Specialising in a wide range of rotary and flail equipment, Trimax has created a benchmark worldwide for...