Tauranga-based exporter, Oasis Engineering, manufactures and distributes specialised valves and couplings for the global Compressed Natural Gas (CNG), Hydrogen, Food and Dairy industries. A member of the German-owned ELAFLEX HIBY Group, Oasis Engineering designs and develops their own range of fit-for-purpose products for CNG vehicle producers in over 20 countries. Their niche customisation and high-flow service offering has distinguished Oasis Engineering against larger competitors and supported significant expansion into the US and Canadian markets. Now with over 30 staff, Oasis Engineering strives to define itself as a key leader of the emerging hydrogen vehicle industry. Kevin Flint from Oasis Engineering joined ExportNZ to delve into the business’s turbulent past, present success, and promising future. Having exported since the early 2000s, Flint reveals lessons learnt from the Global Financial Crisis (GFC) that has ensured the adaptive durability of Oasis Engineering against economic shocks. For anyone interested in the export space, Oasis Engineering is certainly a Kiwi exporter to watch out for as the hydrogen automotive industry develops.

Since Oasis Engineering’s founding in the 1980s, Flint explains that the previous owners understood the New Zealand markets limited growth opportunity and sought to export overseas for long-term growth. The first opportunity for sustained export growth presented itself in Thailand where transport companies required high-pressure (6000psi) valve products for taxis, trucks, and trailers. As one of the few capable producers of this valve in the world, Oasis utilised their competitive advantage and began taking off in Thailand in 2006. Flint explains that a year later he was brought into the business to investigate potential new products and distribution methods to expand Oasis into further markets. Using a GAP analysis, Flint found that while Oasis was not the cheapest on the market, their industry lacked competitors who delivered “in full, on-time and in specification”. Over the next few years, Oasis utilised a methodology based on the theory of constraints to implement lean manufacturing and quality standards that conformed to international standards. Flint explains that this development towards quality filled the gap in the market left by competitors and increased delivery performance from 67 to 95 per cent. New product design and development also characterised this period for Oasis.

From 2007 onwards, Oasis Engineering began appearing in new markets in Canada, Sweden, South-East Asia, South America, and the United States. The business’s pallet of new products and quality assurance methods fostered a niche customer-base in each market that trusted Oasis’s products and quality delivery. Flint also emphasises that having staff with bilingual language proficiency and experience in these foreign markets were instrumental to market launch success during this period.

In 2010, Oasis was approached by a Nebraska-based company that had developed the biggest composite cylinder in the world. The company urgently required a valve and coupling that could fit and effectively operate the cylinder. When used effectively, the cylinder loaded onto a trailer offered larger transportable capacity and drastically shorter time periods to both empty and fill. Despite concern of whether the cylinder would sell, Flint took the opportunity and developed a valve that met the high standards demanded from the innovative cylinder. Unbeknownst to Flint at the time, in the span of two years this investment directly started an entire industry in the US and Canada that hadn’t existed before. These trailer mounted cylinders with Oasis’s valves and couplings represented a seismic shift in efficiency for gas transportation across North America. As stated by Flint, “We created a new product that was aligned with the innovative technological developments occurring throughout the industry. By maintaining this edge over competitors, we were eventually picked out of the industry for our competitive advantage and were rewarded in-kind.” Flint tells us that expansion occurred at such a rapid rate that now 40-50 per cent of their business in North America is focused on this product.

Overall, today 75 per cent of all of Oasis Engineering’s exports are dedicated to North America with 15 per cent exported to the rest of the world and 10 per cent distributed across New Zealand.

However, there are also nations that Oasis has exited from due to either receiving too little or too inconsistent business in the market. As explained by Flint, “India and China are two countries that this has occurred in. It’s not that we can’t try sell more into these markets, it’s that choosing where to focus on and having the right people in the business to facilitate growth within a particular market is key. For this reason, we’ve dedicated resources into other markets that fit our model closely. However, the right character and drive in any business can overcome these obstacles.”

In alignment with this philosophy, Flint believes tenacity is a key characteristic every exporter should possess. Tenacity can be defined as “the quality of persistent determination to continue what you are doing regardless of potential difficulty.” Oasis’s tenacity in new markets forced the business to continuously undertake new opportunities to penetrate niche foreign markets and industries. As we can see with Oasis’s success with American-made trailers, the result of this tenacity was realized in large profits and returning customers.

In the span of Oasis Engineering’s existence, there have been three large drops from their typical 10-15 per cent annual growth. In order, these drops were caused by the 2008 GFC, the 2014-2015 oil price plunge, and COVID-19 in 2020 and 2021. By developing an effective contingency strategy from the GFC, Flint explains how Oasis Engineering was able to emerge both stronger and more resilient against future crises.

The GFC halved all business overnight with many of the business’s government infrastructure contracts disappearing instantly. The absolute first necessity for Oasis was to scrutinise cashflow by making employees redundant and halting production to sell off as much existing stock as possible. Once cashflow was streamlined, Oasis focused heavily on product research and development to ensure the business was prepared when emerging from the GFC. Flint tells us that over a third of the factory was dedicated to making new products. In 2010, Oasis emerged stronger and more innovative with 20 per cent more new products developed. As a result of this strategy, the business ensured their continuity with returned growth and a potent competitive advantage against competitors in foreign markets.

By the time of the oil price plunge five years later, the CNG industry was completely shelved by consumers in exchange for oil operated products. Knowing the market would eventually adjust back to CNG products, Oasis used the same strategy developed during the GFC. In doing so, Oasis was again able to increase their product range to offer returning consumers cutting-edge technology that was keeping up with the demands of the market.

When COVID-19 took the world by storm in 2020, Oasis Engineering had prepared strong crisis contingency plans with versatile supply chains and adaptive employees. While social distancing made it difficult to operate in a factory environment, COVID-19 was the easiest economic shock to mitigate with only small insignificant financial implications. However, Flint is adamant that COVID-19 has paved the way for an impending bust in the global economy in a year or two. Inconsistent supply chain delivery times have caused consumers to ‘panic buy’ in bulk which has been reflected in Oasis’ orders increasing threefold. Once consumers are finally oversupplied from their panic buying, the global economy will naturally slow down into a bust. In alignment with the strategy developed from the GFC, Oasis has prepared to live off existing stock and dedicate resources towards product development when the bust finally occurs. Unlike the GFC however, the business has taken on more engineers to develop new innovative hydrogen vehicle products.

A few years ago, Oasis Engineering’s German parent company realised petrol and diesel cars will become extinct and that electric batteries are merely a finite solution to a broader problem. The parent company recognised hydrogen as the future for vehicles as the most common substance in the universe with multiple sources of generation. Despite the potential for synthetic and biofuel alternatives, hydrogen outpaces their development and likely future accessibility. The largest difficulty to realising this future for hydrogen vehicles is the high initial expense of setting them up. However, Flint not only sees hydrogen as the future, but believes Oasis can become world leaders in hydrogen refuelling products to eventually become a globally recognized industry brand. And with only three companies leading the way in manufacturing hydrogen refuelling products, this ambition could feasibly be achieved before 2032. Under such prospects, we here at ExportNZ are truly excited for Oasis Engineering’s future as the automotive industries prepare to go through an unprecedented transition.

In another 50 years’ time, ExportNZ will have their 100th anniversary, which for us, will mark a century of helping Kiwi exporters. We asked Flint what words of wisdom he had for future generations. In Flint’s words, “Get out there and have fun. I’m a big traveller and backpacker myself, and the export industry provided an opportunity to travel the world and get paid to do it! To succeed, you have to enjoy travelling and going around the world at crazy hours to meet people and ply your trade. Export isn’t just a job, it’s a passion and a lifestyle.”

Special acknowledgement: James O’Riley (a bright young 2nd year Otago University student studying Management, History, Politics) interviewed exporters over the last few months.    James has written some excellent pieces for us. This is the first in a series celebrating 50 years of ExportNZ. 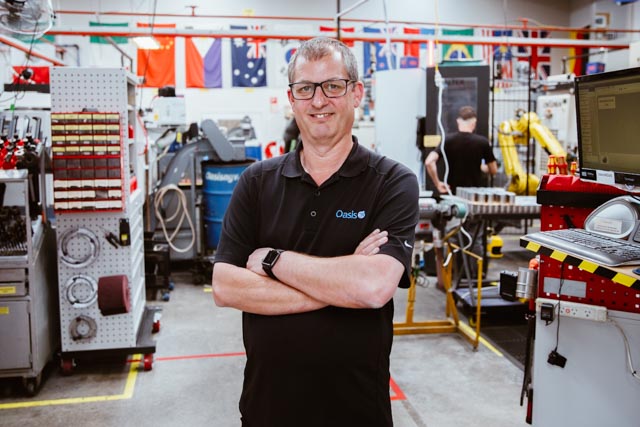 Under the astute leadership of Rodney and Angela Sharp, Progressive Hydraulics is a Kiwi exporter that has continuously challenged the limits of innovation to create revolutionary products. Using an in-house design team and specialised 3D modelling tools, Progressive...