As the world continues to experience a huge uplift in demand for organic fruit, I picked the brains of Oob CEO Robert Auton to find out how you overcome the challenges of international growth in the organic fruit market.

“It was always our intention to export from day one. Part of our criteria was getting involved in a product that had mass appeal beyond New Zealand. Our research showed blueberries were in high demand internationally and growing in popularity,” says Robert. 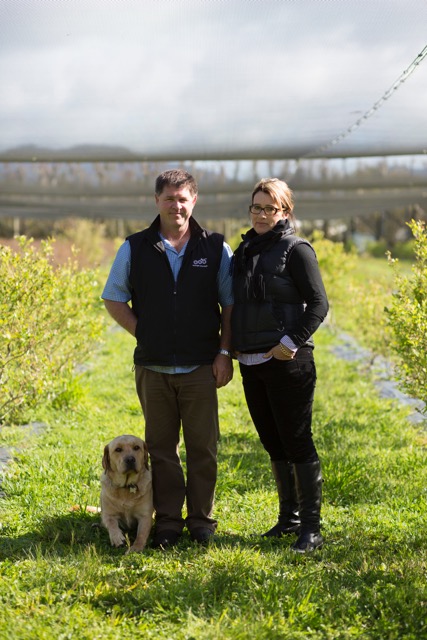 Producing frozen fruit took off when they entered the Australian market in 2012, after approaching Woolworths with an organic berry and ice cream offer. Their consumer base grew massively in a very short period, so the challenge was securing enough product to meet demand. Purchasing organic fruit off other Kiwi growers was no longer enough. They had to search the globe for organic fruit, and Chile came to their aid.

Two years after getting into Woolworths, Coles approached them, followed by Metcash (the independent group of supermarkets). Now in over 3000 stores in Australia, they’re the dominant organic brand there, and in New Zealand.

“We’ve started exporting frozen fruit and ice cream into Singapore and Malaysia about four years ago,” says Robert. “Given both countries have ample fruit year-round, I was surprised at how well our fruit is going. But I think it’s being certified organic, and convenient, that’s made it popular.”

Back when they started in 2001, Robert and his wife Shannon predicted that organic was going to be a long-term trend.

It’s since gone from a niche market to become more mainstream.

“We’ve had challenges along the way,” says Robert. “When you’re growing at 50% there are financial and capability strains.  We got through that, and now we’re still growing but able to manage it better with financial modelling.

“We’ve had pressures along the way from adverse exchange rates and the huge uplift in demand for organic fruit over the last 3-4 years which drove up the price of that commodity significantly.”

Growth in organic orchard planting globally has eased the situation, and their Chile partner has expanded its operation.

“We still think the organic market is going to grow 16% by 2020, and there’s a willingness to pay premiums for organic products.”

The smoothie market is also a target, as Robert predicts it’s still got significant growth in it. Given his success in picking the organic trend, I’d say he’s probably right.

Mr Apple’s plan to get pick of the bunch

Mr Apple is the New Zealand exporting success story that only a few kiwis have heard of. Mr Apple is the country’s largest vertically integrated apple company, meaning that they control every aspect of apple production from planting to growing, packing, sales and...

2021 has undeniably marked a breakthrough year for Fix & Fogg’s success as a New Zealand business in the international export market, particularly against the obstacles posed by COVID-19. Their iconic nut butters have taken the world by storm, with the United...

Go Native helps clean up our world Without a healthy planet to enjoy, what do we have? Duncan Forbes, founder of Go Native which makes natural fruit bars and meals for the active outdoors market, says it’s a natural fit for the company to team up with Sustainable...

Loadscan – Adapting for International Success in the COVID-19 Market

Loadscan - Adapting for International Success in the COVID-19 MarketFounded in 1998, Loadscan Limited (https://www.loadscan.com/) are a Waikato-based business that globally export highly accurate payload...